Got surprised, very surprised today when my hubby called and told me that I have to pay extra RM0.20 (stamp) for a piece of letter (makes it RM0.50 a piece) just because I wrote down the postcode at the lower right of the envelope. So ridiculous! And I need to post more than 350 pieces of letters, can you imagine how many extra money I have to pay!? Around RM70.00 (RM175.00 instead of just RM105.00)!!
When I was young, I used to do the same, and as I can remember, we used to have the kind of envelope which have boxes for postcode right at the bottom. Since when does this changed? Maybe I didn't notice, but still, extra 20 cents is too much for a simple mistake!!
I know that it's my own fault - writing down the postcode without prior checking. But I was only making it easier (in my opinion) for the delivery process - highlighting the postcode. Well, maybe it does sound stupid! But I was only trying to help.... :( but it costs me RM70 instead......
And you know what makes it worse? I have to either pay the extra money or to dispose the envelope and use a new one because I can't just simply erase the postcode. And even if I do manage to erase all the postcodes, I would still need to pay the extra 20 cents!! Can you believe that!!?
But what's even worse, eventhough I pay the extra 20 cents, the process is still the same, very slow! Typical! Poor hubby, he skipped his lunch and late for work just to help me.... hope nothing else happens next, who knows, more ridiculous procedures.
Thanks to my hubby.... :)
~ After I googled, I finally found out that Pos Malaysia started to have all these standards in Jan 2006. No wonder I didn't know. That time, most people use e-mail instead of post mail. I bet people at my age who used to do the same as I did would still be doing so.... But I couldn't find anything about penalty or the extra charge in the web. Well, maybe I overlooked. 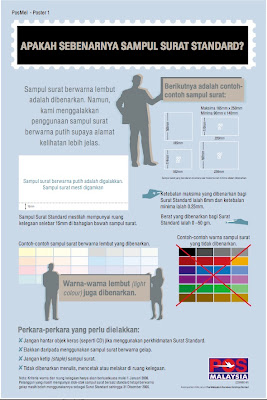 Labels: Story Of The Day

A Bit About This Blog

Assalamualaikum..
sharing thoughts is something that my husband always does and he urges me to do the same. I always say to him that being a full time housewife, I have nothing to share. Plus, I'm not good at writing. But then I realize, even though I have nothing to share, I do have lots of memories to be kept. And writing a diary is one way of doing it.
This blog is a Diary of my life.. and if there is something that can be useful to the readers, I'm glad that I could share..

How You See Yourself